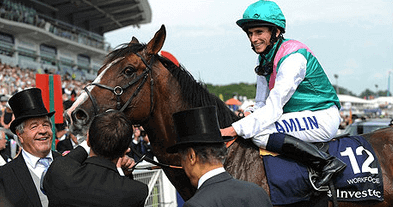 The half yearly World Thoroughbred Rankings have been released - with the rankings inclusive of performances from the 1st of January 2010 through to the 20th of June 2010. It contains a mixture of some old favourites (the perennial high-class performers) with the likes of Zenyatta; Goldikova, Fame And Glory, and Paco Boy - and includes the latest star 3 year old.

Workforce does appear to be a worthy number one on the strength of his record breaking performance to win the Epsom Derby.

But I do wonder what it will take to see the elevation of the super mares that never disappoint: Zenyatta and Goldikova.

Just outside the top 10 is the top rated sprinter in the world Sacred Kingdom from Hong Kong (ranked equal 11th on 122). Just behind him is the top ranked Australian - now trained in Ireland by Aidan O’Brien - Starspangledbanner. His ranking comes from his Golden Jubilee Stakes victory. The next rankings will have to take into account his follow-up victory in the July Cup - surely marking him now as world’s best sprinter.

This time last year (June 2009) the World Thoroughbred Rankings were as follows:

Once again a brilliant Epsom Derby winner leads the mid-year assessments. Time will tell if the latter half of the year will provide the inexperienced Workforce the springboard to be measured as world’s best thoroughbred at year’s end as Sea The Stars did in 2009. Workforce is currently favourite to win the 2010 Prix de l’Arc De Triomphe ahead of fellow top-ten horses Fame and Glory (second favourite) and Lope De Vega (3rd favourite).